Open (or create) several variables to edit them as a spreadsheet. Hold down the Shift key while opening them to get them to align. As long as the windows are aligned, each row across all open windows in the relation represents a case in that relation. You can align data editing windows that are already open with the {Special > Arrange} Align Editing Windows command. 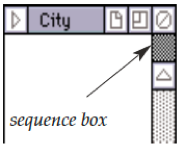